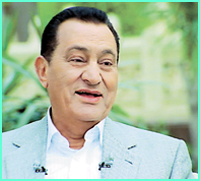 Egyptian TV will start broadcasting on Sunday a series of interviews done with President Mubarak entitled “Word to the history.” It entails a lot of Mr. Mubarak memories during the previous wars, his career, and his relationship with both presidents Gamal Abdel Nasser and Anwar El Sadat. According to Al Ahram, the president will reveal a big surprise and he will also answer the question that has been on the minds of millions! Will he run again for a fifth term in September’s elections?

Mr. Mubarak is starting to play “a l’Americaine!” He is actually launching an election campaign! For the past months, he has been all over the place, visiting cities, and inaugurating projects. And now, he is using the visual media. The series of talks are directed by the famous cinema director Sherif Arafa, its music is composed by Ammar el Shriri’ei, and hosted by the eloquent Emad El Deen Adib. What a great choice of experts for the task of ‘public image polishing’.

During the past period, he and his government adopted a lot of unpopular decisions. Recently, there has been a lot of talk about removing food subsidies that have been a trait of the Egyptian economy since the fifties probably. They continue to be one of the biggest burdens to the government budget. Removing subsidies has been a gradual process since Dr. Ahmed Nazif formed his cabinet in July 2004. It started with diesel fuel late in the year. There is a noticeable decrease in the supply of gasoline fuel octane 90 and gradually being replaced by the gasoline with a 97 octane and 40% higher price. My rusty engineering background is driving me to think that the difference in octane does not really justify the 40% difference in price. And recently, the boldest move is towards the removal of food subsidies and replacing it with cash allowances. (A move that the Russian government has made before.) For Egypt, this is a very risky move. The last time prices of subsidized food were increased, people rioted against the government like no other time before. And the last of the unpopular moves is the ‘kissy-kissy’ attitude towards Israel. Israel finally got a deal by which it will import Egyptian natural gas; something it has been wishing for since 2000. This followed the signing of the Qualified Industrial Zone agreement with the US and Israel. Another unpopular move!

Did he really feel the heat and frustrations coming from the masses? Will he really surprise the world and announce that he won’t run again? Will I stop being too optimistic?! The TV talk is just a way to re-introduce him to the public as the only viable alternative. The logical part in me does not expect another surprise like the February 26th one. The talks were taped in mid April. If there was really a surprise, rumors would have played their famous role. Alas, it is just a show. Mr. Mubarak is now in the show biz.

I am still betting that he will be running again. Anyone for counter bets?

Posted by Samer ATALLAH at 5:29 PM