What I have seen and went through on Wednesday May 25th, 2005 is not something I can get off my back and move on. It is a turning point in my involvement in Egyptian politics. What is really ironic is that on this very same date, three years ago, was the beautiful memory of receiving my Masters degree from Berkeley. Now, it is a memory that I see every night in my dreams.


Note: I did not take any of the photos associated with this testimony. They were take by people who witnessed the same events and were courageous enough to carry a camera and shoot. I salute them. 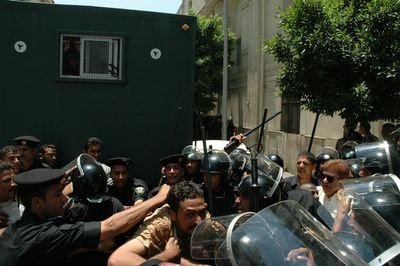 This is how the state police arrests someone whose only crime is that he wants to speak out and say no. Return to My Testimony

Photo 2: Use of Public Buses 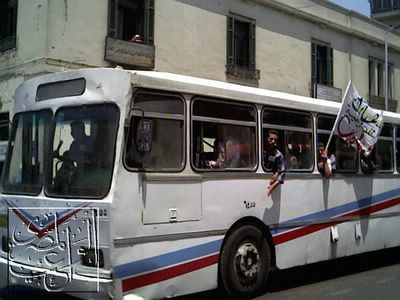 The government provided the NDP gang with public buses while it prevented Kefaya demonstrators from stepping outside the sidewalk. Return to My Testimony

Photo 2: Use of Public Buses 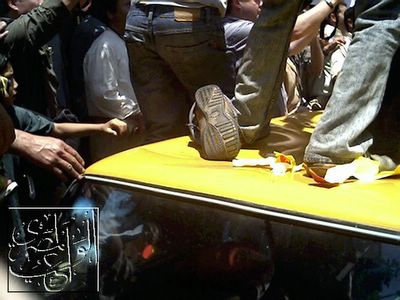 President Mubarak always warned that demonstrators who abuse private or public property will be arrested. I guess he forgot to say that the goons of his party are an exception. Return to My Testimony 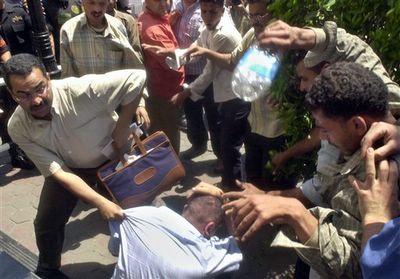 One supporter being beaten while another supporter trying to save him. Return to My Testimony

Posted by Samer ATALLAH at 9:45 AM 0 comments 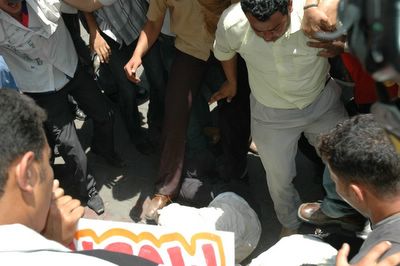 The poor guy! All he wanted was the freedom of speech. Return to My Testimony

Posted by Samer ATALLAH at 9:42 AM 0 comments

Photo 6: The Way Out 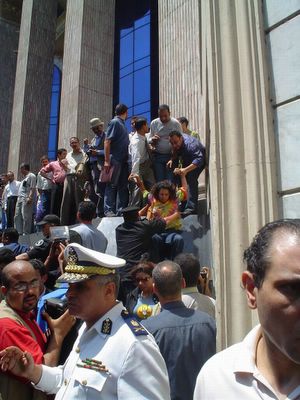 Sliding our way out with the help of a policer officer; the same officer who promised to get us out. Return to My Testimony

Photo 6: The Way Out

Posted by Samer ATALLAH at 9:39 AM 0 comments 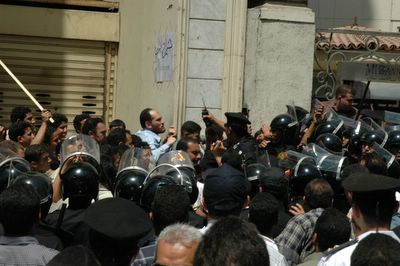 The trap: the garage entrance. Return to My Testimony

Posted by Samer ATALLAH at 9:37 AM 0 comments 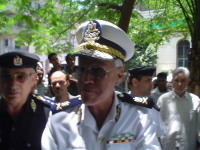 The protector of civil rights and citizens shouted to his soldiers: "Do not move!" Return to My Testimony

Posted by Samer ATALLAH at 9:35 AM 0 comments

While flying out of Cairo, I recalled words from discussions that I had during my visit.

“el balad ma’bash lihha saheib” A judge. The closest translation is that things are getting loose.

“In a Muslim Brotherhood demonstration, 400 can be arrested out of thousands. In a liberals or leftists demonstration 400 can show up.” A demonstrator.

“If free elections were to take place, the Muslim Brotherhood will gain 30% of the parliament seats”. A political analyst.

“Diplomats represent Egypt not the Egyptian government.” A diplomat.

“The Egyptian political opposition is still in its infancy, yet it is moving. The stagnant water is starting to shake.” A political science professor.

“None of the parties have the environment on their agenda!” Director of an environmental rights advocacy NGO.

“The king of spade will now lose!” A friend during a cards game.

“Mrs. Aisha has been relocated to another office far away from where she lives because her boss did not like her.” A government employee in the Ministry of Social Affairs.

“You need to make reservations before you come!” Manager of a car repair shop.
“We have wireless internet in our café.” A waiter.

“Why do you want to vote? He is going to win anyway!” An employee in the voters’ registration office.

"I let her pass because she is a foreigner. You have to go the other way." A traffic soldier in Tahrir Square.
“She is homesick to a place that does not exist anymore!” A friend of mine commenting on the main character of Ahadaf Soueif’ Map of Love.

“They touched me all over!!” A female friend telling me about her experience in the May 25th, 2005 demonstrations.

"I 'm physically ok." Me when asked how am I doing on May 25 evening.
“The summer is starting early!” My mother.

I pause my reflections for a second to listen to the air hostess talking about her stay in Egypt to the passenger sitting next to me:
“We have been asked to remain in our hotel rooms for security reasons”
I think more deeply about my home visit. The only words that kept on oscillating in my mind were: humiliation, despair, sadness, and anger.

I returned to my apartment in Montreal. I felt safer in Durocher Street than in Hussein El Marsafi Street. This is when I felt that I am loosing home. I check my email and I find the words of the poet Kamel El Shinawi in a friend’s message:
“I do not complain.
Complaining is bowing,
And the pulse of my veins is pride”
انا لا أشكو، ففى الشكوى إنحناء
و أنا نبض عروقى كبرياء
This is when I felt that I have to fight to get it back.

Egypt, here is my pledge to you:
This is not the end, this is just the beginning.