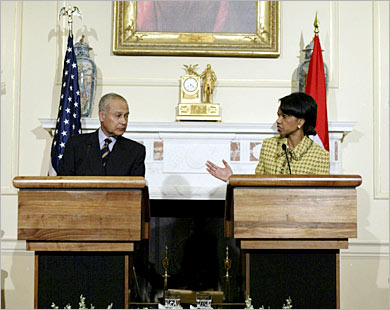 In preparatory school, our science teacher and preparatory section director Monsieur Raouf Asmar, used to give us hard time about doing (or not doing) things out of fear. He used to say the famous saying: “benkhaf manikhtishish” (we fear but we do not shy out). The moral for 15 year old teenagers is that most of the people do acts out of fear not out of duty or respect or out of consideration. At the time, it was true. We, nasty teenagers, used to pretend discipline when he was around and when he was away we wore our red devilish dress. I would hate that our government would have the same teenager attitude.

During her press conference with H.E. Mr. Ahmed Abou El Gheit, Secretary of State Condoleezza Rice reiterated what President Bush mentioned during his State of the Union Address. “The Egyptian Government has the opportunity and the responsibility to be as great a leader for reform in the region as it has been a leader for peace”, she said. Opportunity and responsibility!! She also expressed “strong concerns” about the imprisonment of opposition party leader Ayman Nour. Our Minister of Foreign Affairs did not comment on the two issues during the press conference. But once he returned home, presses releases came out announcing that the political reform is an ongoing process and that Nour is being arrested for criminal accusations and not due to his political affiliation.

When Egyptians demand reform, it is always the same answer. The economic reforms have to take the priority and that constitutional reform is a dangerous step now and might lead to instability in the nation. But when the US of A brings up the issue, it is the silence.

The thing that I would hate the most for my country is that the government would eventually end up kneeling down to the pressures of the US of A not to the demand of its people. That would really hurt. Nothing will sadden me more.

Posted by Samer ATALLAH at 9:37 PM

I had some feeling for it.. you sound an old Jesuitien. What year did you graduate?

Shouldn't be saddended buddy. If its genuine reform, doesn't matter where its coming from.